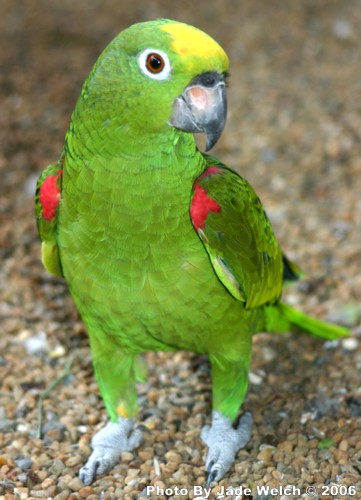 The Yellow-crowned Amazon originates from the Americas where it and its sub-species occupy a large range. Unfortunately though, some of these sub-species are endangered or facing extinction due to habitat destruction and the trapping of these birds for the pet market. Fortunately however the the Yellow-crowned Amazon is available to aviculturalists in good numbers. In the following I hope to provide the reader with an overview of this highly desirable species as it is in the wild and in captivity.

Description
The Yellow-crowned Amazon (Amazona ochrocephala) measures approximately 35 to 36 cm’s in length and is predominately green in colour. As the name suggests the crown is a rich yellow and is occasionally dotted with a few red or orange feathers. The bend of the wing and the speculum is red and legs are light grey. The beak dark grey and light pink in colour. The periothalmic ring is white and iris orange. Immature birds have a smaller yellow patch on the head and brown iris.

Distribution and Habitat
The Yellow-crowned Amazon is found in parts of Colombia, Venezuela, French Guiana, Guyana, Brazil, and Trinidad. The Yellow-crowned Amazon occupies a number of habitats some of which include open woodlands, cultivated areas, savannah and rainforests. Throughout parts of their range they have been observed flocking at barreiros. Barreiros (which are mineral rich soils that occur along river banks) play an important role in the lives of a number of South American Parrots. The diet of the wild Yellow-crowned Amazon varies and consists of fruits, blossoms, berries, nuts, seeds and possibly insect larvae.

Threats to wild populations
Although wide spread, the Yellow-crowned Amazon and its sub-species are like so many other species of parrot in that they are under increasing pressure to adapt to changes humans are making to their habitat. Not only is habitat destruction taking its toll on this bird and its sub-species but so is the continual trapping of these birds for the pet trade. Through out their range there are numerous records of people keeping these birds as pets particularly because of their great ability to mimic sounds and speech. In almost all of these cases these so called pets have been removed from the nest of wild birds at a young age and hand reared before being sold off as pets. These birds are also faced with natural disasters such as hurricanes which occur through out their range and make island populations vulnerable.

Accommodation
The Yellow-crowned Amazon is easy to house. The preferred type of housing for this species amongst Australian aviculturalists is the suspended aviary. The suspended aviary has many advantages over the conventional type aviary and is perfectly suited to housing this species. One advantage for housing this species in a suspended aviary is that the birds may become aggressive during the breeding season and if the keeper does not have to enter the aviary he or she is less likely to suffer the pains of being attacked by an angry pair of Amazons or a protective father to be.

A suspended aviary made out of steel measuring a length of 4 metres long x 1.2 metres wide x 1.2 metres high is suitable for housing this species in. A report of a novice American birdkeeper who lost his pair of Yellow-crowned Amazons was published some time ago on the internet. Recent correspondence with this birdkeeper has revealed that the birds chewed their way out of an aviary poorly constructed of wood and chicken wire. 1.3mm gauge x 12.5 mm x 12.5 mm wire is suitable for the use on aviaries housing this species however it appears that some aviculturalists choose to use a heavier gauge wire. For example some of the aviculturalists interviewed for this article use 1.6mm gauge x 12.5 mm x 12.5 mm wire which although expensive is strong and durable and keeps the birds in and rodents out. Pet Amazon Parrots require a large sturdy cage with suitable bar spacing and plenty of toys to play with.

If these birds are to be housed side by side with any other species particularly their own kind it is suggested that solid partitions be installed. Leaving 50 % of the roof open allows the birds to gain access to rain showers and sunshine which is beneficial for their health. Each aviary should back onto a safety porch to ensure that if any bird escapes it can be re-captured and placed back into its aviary. Perches made out of natural branches such as the various Eucalypts are suitable for use with these birds however they should be replaced regularly as they get a good work out from these birds. These Amazons get hours of enjoyment from stripping the bark off natural perches.

Diet
Catering for the Yellow-crowned Amazon is relatively easy. A diet consisting of a daily supply of fresh fruits and vegetables, seed and or pellets and sprouted seed should be fed to these birds all year round. Fruits and vegetables that may be fed include sweet potato, apple, celery, pear, peas, passion fruit, pumpkin, chili, grapes, corn, carrot and snow peas. Of course a number of other fruits and vegetables such as some of the exotic fruits now available may be fed to these birds. Avocado however is a fruit that should never be fed as it has been found to be the cause of a number of deaths in birds.

If nuts are to be fed to these birds they should be fed sparingly as they contain high levels of fatty oils which when over fed will lead to obesity in these birds. The addition of calcium to the diet of these birds is practiced by some aviculturalists who give their birds both cuttlebone and a liquid calcium supplement. The liquid calcium is often poured over the fruits and vegetables or over the soaked seed.

Worming
Although not highly susceptible to worms Yellow-crowned Amazons should be wormed regularly. A good worming regime will see the birds wormed at least twice a year. It is recommended that feacal tests be performed by an avian vet to identify if your birds have worms and if so what type of worms. Once the worms are identified you will be able to choose the wormer best suited to your situation.

Protecting Your Future
Whilst the Yellow-crowned Amazon has fallen in price it remains at a price range that is out of the range of many. It is for this reason and the fact that more and more callous individuals are choosing to break into aviaries to steel birds of every size, colour and monetary value and on occasion’s even eggs that any aviculturalists keeping these birds should upgrade their security to protect their stock.

Keeping a padlock on your aviaries, installing security cameras, a safety porch and alarm systems and micro chipping your birds is highly recommended as is keeping guard dogs on your property to discourage potential thieves. What you’re willing to spend to secure your future is up to you as an individual but it must be remembered that poor security will potentially lead to thefts at your aviaries in the future.

Sexing
Being a species that is not sexually dimorphic it is recommended that any aviculturalists wishing to keep and breed this species of Amazon Parrot should have them sexed. If surgical sexing is not for you then why not get your birds DNA sexed. Whilst DNA sexing is more expensive then surgical sexing it has a number of benefits over surgical sexing. One benefit being that it is non invasive and another is that it is less stressful. More and more avian vets are now also offering DNA sexing alongside their surgical sexing services.

Breeding
Breeder beware, during the breeding season these Amazons may turn extremely aggressive towards anyone (even their keeper) and especially any strangers entering their aviary whether it is to feed them or to check their nestbox for eggs. Cocks in particular are famed for giving off dramatic threatening displays where they fan out their tail feathers, dilate their pupils and give off a number of loud calls or growls.

When dealing with an aggressive pair of Amazons for the first time one may be intimidated however it must be remembered that these birds usually return to their old self once the breeding season is over. Another important item to remember is that these birds may on occasions attack their mates in a fit of rage if they can not get to the person they intended to attack in the first place. This is what is termed by some aviculturalists to be misplaced aggression and is best dealt with by giving the birds more privacy particularly during the breeding season.

Although the vertical style nestbox appears to be the most popular choice of nestbox amongst Amazon Parrot breeders two other varieties are being used with great success. The first is the boot style nestbox and the second is the Z style nestbox. All have their advantages and should be fitted with a ladder and filled with a good nesting material such as non-treated pine shavings to a depth of five centremetres.

Although the Yellow-crowned Amazon is sexually mature at around two to three years of age eggs should not be expected until the third year. Clutch sizes vary from two to four eggs with incubation lasting from 26 to 29 days. The young fledge at around 12-14 weeks of age. Some aviculturalists remove the eggs or young from the nest for hand rearing in order to induce their birds to double clutch. In most cases the second clutch is left for the parents to rear.

Pet Qualities
Through out the world the keeping of Amazon Parrots as pets is increasing. Some of the reasons for this are that the Amazons have great pet qualities, can learn to talk a great number of words and have a great personality. The Yellow-crowned Amazon is one of the most highly prized pet birds as can be seen by the number of these birds being kept as pets through out Europe, the USA and through out their natural range.

The ability of the Yellow-crowned Amazon to learn to say so many words and whistle a number of tunes and their endearing personality make them the ideal pet bird for those wanting something exotic and exiting. Over the next few years as we see more and more Yellow-crowned Amazons being bred and the price on these birds dropping we should see the demand for these birds as pets increasing.

Conclusion
The Yellow-crowned Amazon is a delightful aviary subject and a great pet bird. If you’re looking for a challenge and something a little more exotic then why not invest in a pair of Yellow-crowned Amazons. These birds are sure to be one of the most popular pet and aviary birds available to Australian aviculturalists and pet owners in the future.

Books on Amazons
Looking for a good book on Amazons? Why not visit our Rec Reading page to read up on Rosemary Low's fantastic book AMAZONS which is available from ABK Publications.